Today, Room 4 had a MITEY session where we discussed a lot about mental health and people that we think that we can open up to when we’re feeling at our lowest or have something on our minds that we would want to talk about.

This lowkey gave me motivation to write a bit about the “boy’s don’t cry” phenomenon, and so I did.

Below is the final piece of writing. It’s not supposed to be very professional or anything, just something that I wanted to do :))

Should boys cry? I think we all know the answer to this question, and the answer is yes. If anything, they should be able to cry and not have to worry about how “masculine” they appear to be when they do express basic human emotions.

The sexist double standard where if a woman cries, she’s in touch with her feelings but if a man cries, he’s being too emotional and is weak really influences males even to this day. Especially pre-teens and teenagers, which is the time in their lives where they’ll definitely be going through a lot of different emotions and should be able to have the freedom to express those feelings without a second thought.

I find that not many boys open up about how they’re doing beyond just responding with “I’m doing fine” or “good” which could be the truth, but not always entirely. It’s almost as if they feel like they can’t be seen as vulnerable to anybody, otherwise they’ll lose their masculine image.

Having this mindset will result to them bottling up their emotions, which is a very unhealthy way to cope and most definitely also not the way for them to deal with the things that they’re going through.

It doesn’t take somebody with a very high IQ to recognise that everybody has feelings and can experience all of the human emotions. Women can get angry, just like men as well as how men can have sensitive spots and be moody, just like women and everybody else.

Being emotional and expressing your feelings are not things that should be restricted to only females, or anybody but males, for that matter.

Today for Mitey, Room 4 focused on the similes and metaphors used in the book Mophead. We also each got a sheet of paper we wrote who we got our genetics from, from our family.

Below is an image of  my poster I made comparing my hair to chocolate pudding. I hope you like it :)) 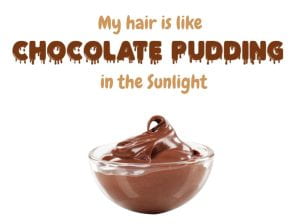