For today’s writing task, I had to write a short narrative based on an image. I chose the image added below, and you can see that it definitely gives off a creepy energy. Anyway, I hope you enjoy reading this short piece of writing :)) 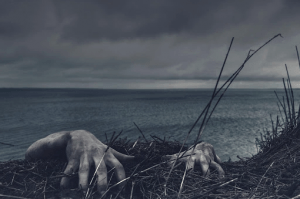 And because of her odd behaviour, she had no friends.. No, like, seriously. It’s just herself, this skeleton of a creature that she had found in a forest a few weeks ago, and her big brain which she had named “Kelly” when she was younger.

The Sun began to set, slowly disappearing behind a crowd of trees, and a shiver crawled down Alyvia’s spine as a wave of breeze washed over her for a split second. She could feel tiny drops of fresh water leak from the grey clouds above her, and she sighed.

“Come on, Sundrop,” she spoke to the dirty skeleton in her hands. “let’s go.”

It wasn’t until she heard the sound of dry grass crunching together that she had not stopped walking. Slowly spinning herself around to face the large body of water from behind her, Alyvia felt her grip on her pocket knife from inside of her pocket tighten.

With caution, Alyvia took slow and steady steps towards the river, and her eyebrows knitted together once her eyes landed on two filthy hands with dirt caked underneath the long and sharp fingernails.

Alyvia was frozen in place with her breath hitched.

That was when suddenly, the pair of hands helped themself up on their own, and Alyvia realised that something was off..

There was no body connected.